“I’d rather go hungry than eat Filipino food” is a real racism statement. This is a straightforward anti-Filipino culture from a Polish blogger “Agness”.

Just a few days ago (a Polish travel blogger) Agness, as what she introduces herself in her blog, wrote about her horrible food trip experience while traveling in the Philippines. The main objective of her travel along with her friend in the Philippines is to find the best local food with a budget of less than $25 per day. Well her expectations were not met and the best anticipation turned out to the worst scenario she ever experienced. Her blog post stirred many Filipinos in the social media.

In her opening she boldly said she doesn’t like Filipino food in general. Take a look at the screenshot of her article below. 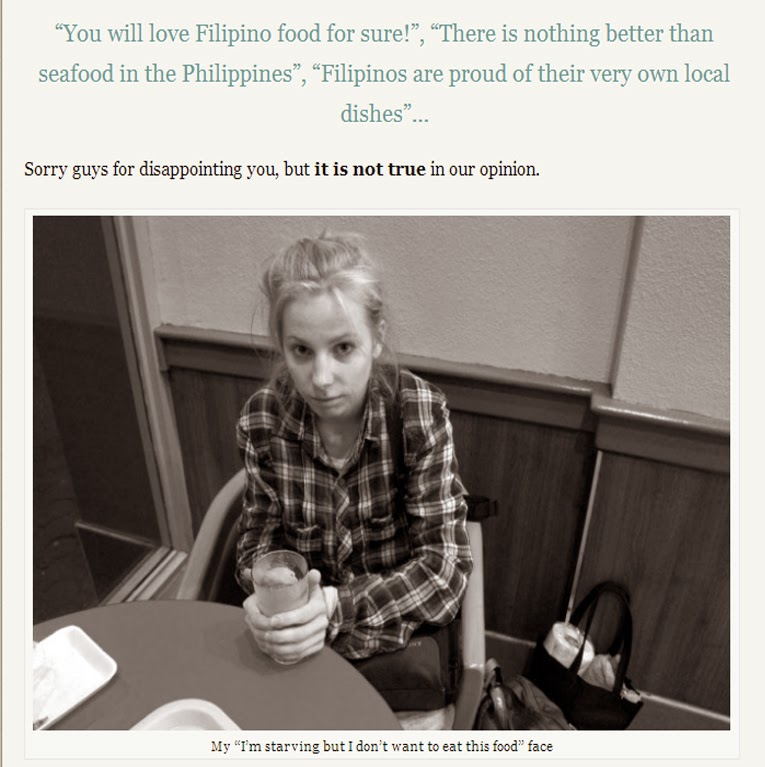 According to her opinion, Filipino food are not to be proud of as what many said. Look at her in this photo, she is posing like a real hungry person. Well let’s examine what she wrote on her blog.

Agness mentioned that she and her friend (Cez) are both food lovers and new flavor hunters and in every travel they make, they do some “proper research” about the place they wanted to go into most especially the food. Take note her term “new cuisines”. In addition Agness said, “Unfortunately, with tears in my eyes and broken hear, we must add Filipino cuisine to our…“. Huh!? Filipino cuisine! Well let’s find out what she’s talking about. 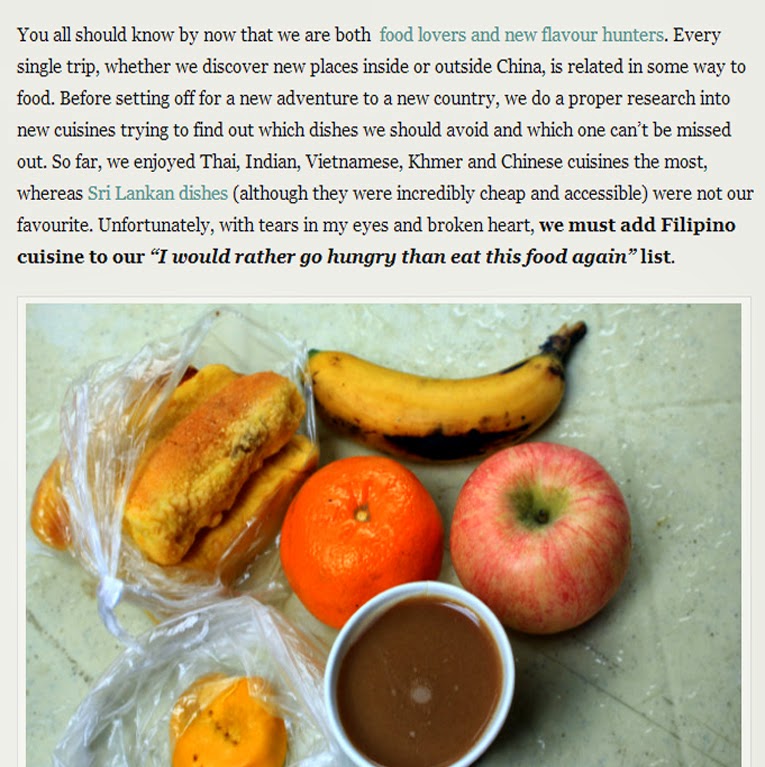 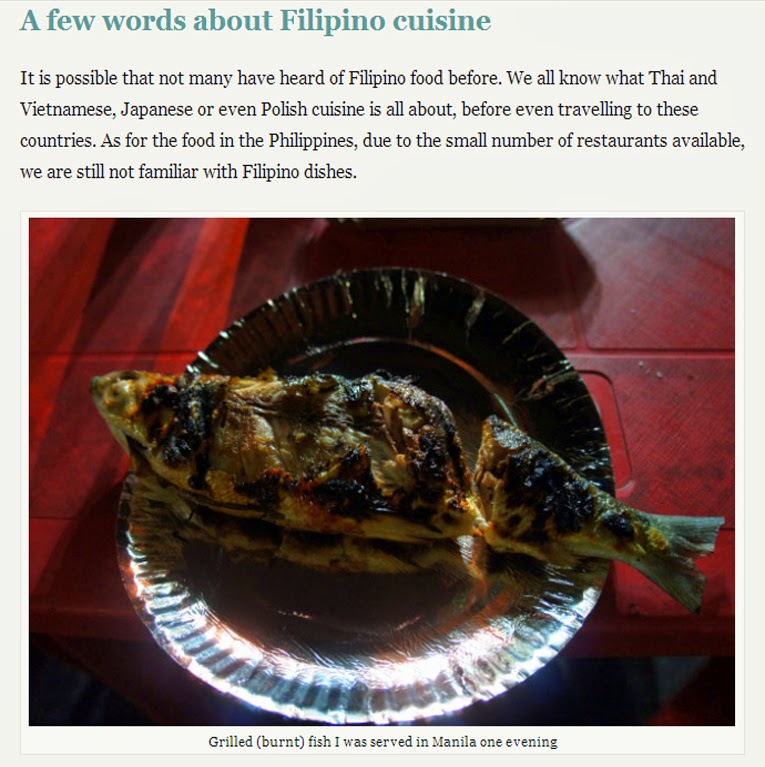 Agness said, she did a proper research about the food but she’s not familiar with it. hmmp. If she did make a thorough research about our cuisine, she must have idea what it is already even if she didn’t see the ones in person. 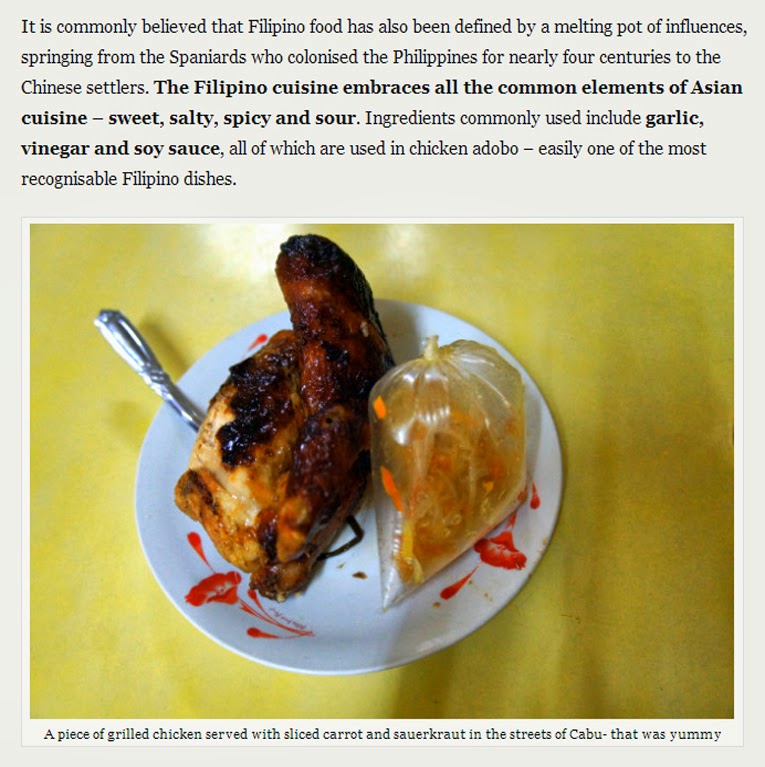 Agness admits that Filipino food like adobo is “yummy” which contradicts to her first opinion. Let’s go on. 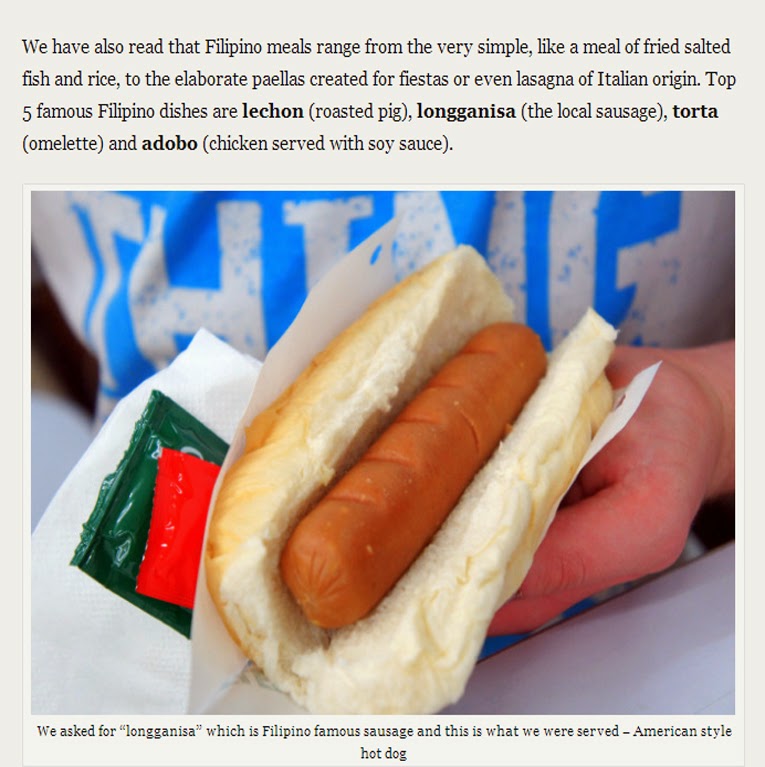 “We asked for “longanisa.. .and this is what were served.” Question, where did you ask longanisa? From 7/11? Hmmp. I was fond of eating this food (on the picture) from 7/11 when I was in the Philippines. I am really familiar with it because the bun used, the hotdog, and the sauce pack is from 7/11. Look, Agness covered the label of the sauce which simply tells us that she asked “longanisa” from 7/11 which typically not served in that establishment. Funny huh! Let’s continue what she’s to say more. 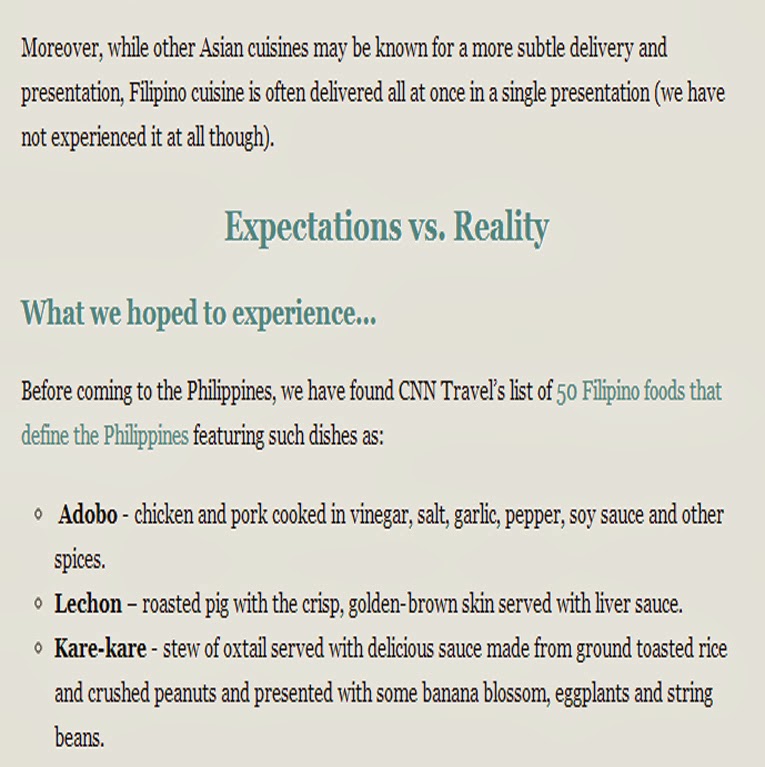 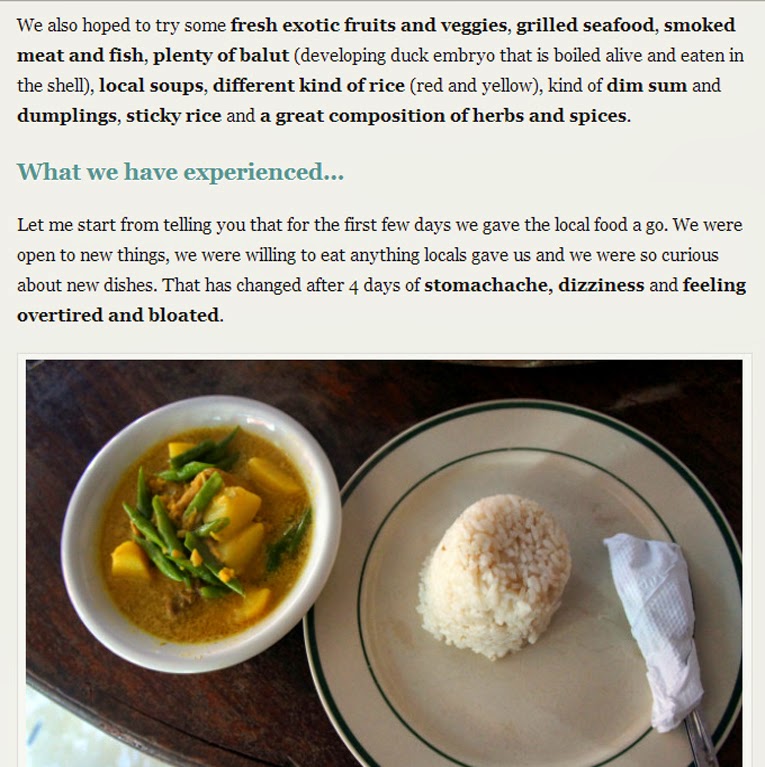 Such exaggerated, overstated and overinflated review of Ms. Agness about Filipino food is not only a real anti-Filipino food but the culture as a whole. She generalized the Filipino food. Just imagine she emphasized in bold font “stomachache, dizziness and feeling overtired and bloated“as what they felt after eating Filipino food. Not only that, they suffered those sickness for 4days as what she mentioned above.

Enough for this. Let’s jump to their “Biggest Disappointments”. 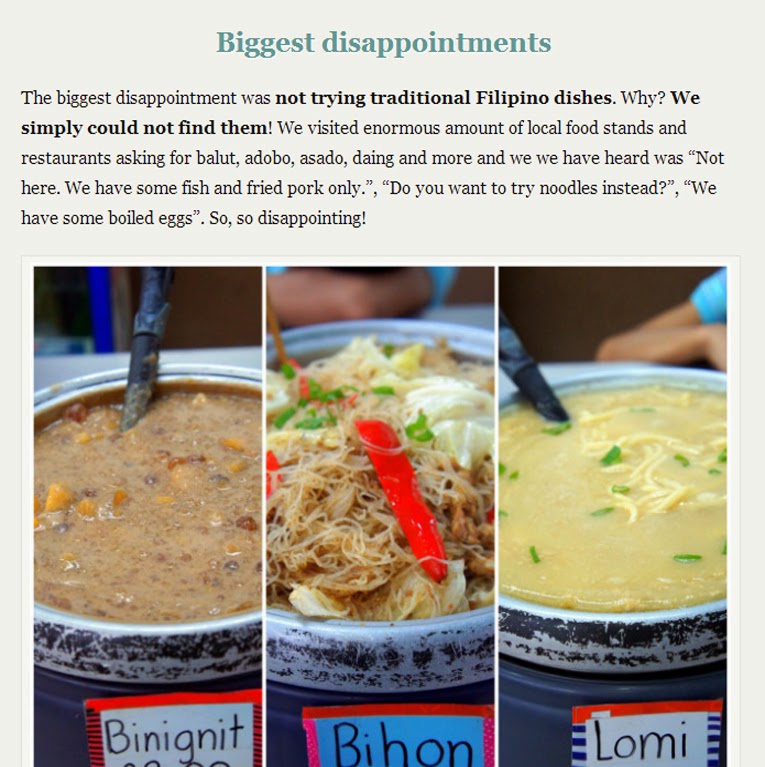 The biggest disappointment was not trying traditional  Filipino dish..we visited enormous amount of local food stand and restaurants asking for balut, adobo, asado, daing and more and we have heard was ‘Not here’…”.

Another overstatement as balut can be bought anywhere early in the evening. They are even sold on the streets by street vendors. Where in the space did Agness go? Adobo can be found in carenderias, etc. I can’t believe her!
Now let’s go into conclusion: 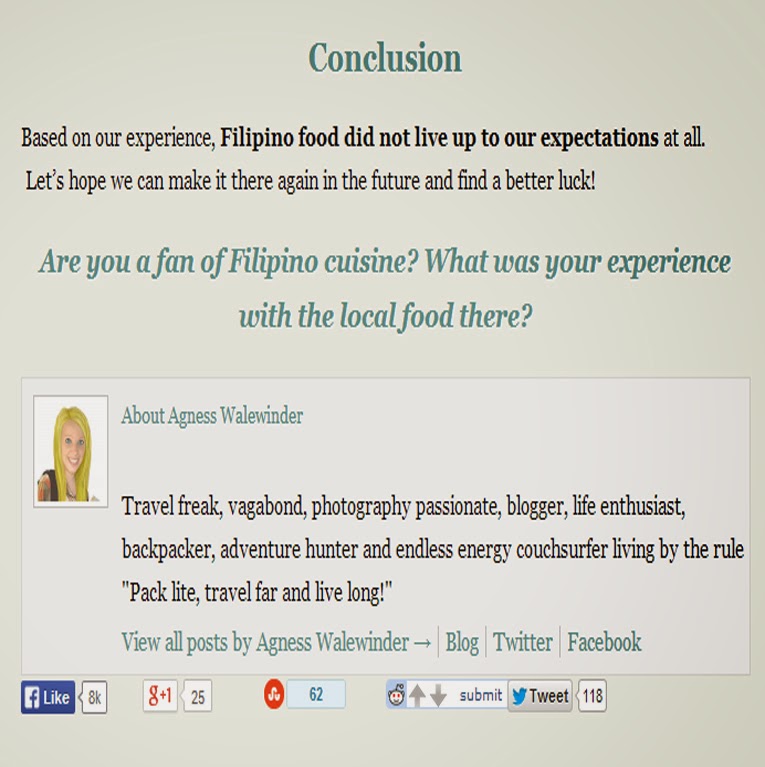 Agness concluded that “Filipino food did not live up” to their expectations at all. I am sad and I pity her for the fate she had while visiting the Philippines but the way she gives her best opinion about the food is simply a sarcastic and racism. “I’d rather go hungry than eat Filipino food again” is very strong and foul statement. It does talk entirely of the Filipino food and culture. In my conclusion, Agness must publicly apologize for this damage she has made against our culture.

Thank you so much for reading.