Skip to content
Chris Paul led the Phoenix Suns past the Milwaukee Bucks in Game 1 of the NBA Finals Wednesday morning, Philippine time. Paul, who is in his first ever NBA Finals appearance, finished the game with 32 points to lead all scorers. He also had 4 rebounds and 9 dimes in 37 minutes. 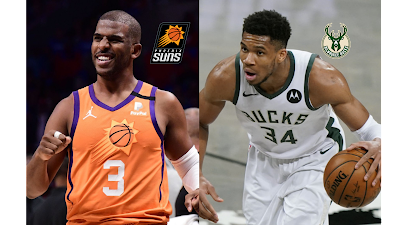 Bucks superstar Giannis Antetokounmpo played his first game after injuring his knee in Game 4 of the Eastern Conference Finals against the Atlanta Hawks. He was listed doubtful but was later upgraded to questionable prior to the game. He finished the match with 20 points, along with 17 huge rebounds and 4 assists in a losing effort.
Other Suns stars Devin Booker and Deandre Ayton combined for 49 points with the latter erupting for 19 boards. Game 2 is on Friday at 9 am PH time. The scores 30-6, 57-49, 92-76, 118-105.