Hashtag OustDuterteNow makes a round on twitter today. It is the new trend as there are more than a thousand tweets with #OustDuterteNow. 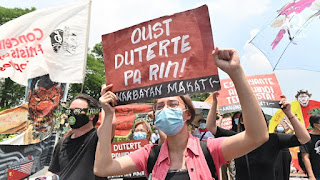 The President shall not be elligible for any re-election but allowing Duterte to run for VP where he is to succeed presidency is the very evil that the 1987 Constitution intended to avoid. Tama na ang mga Marcos at nag-aastang Marcos. Hindi kayo unli sa pwesto, mga gahaman. 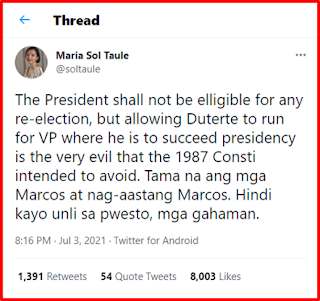 Tweet Maria Sol Taule, which  became popular on the platform. As of writing, the said post garnered 1391 retweets, 54 quotes tweets, and 8000 likes 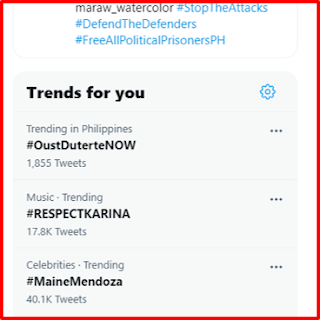 A newly created FB page, @du30patalsikin also runs a campaign against the present government.
On the page they announced to have live webinar via zoom at 3-4pm July 3 in conjunction to the anniversary of the Anti-Terrorism Act of 2020 which President Duterte signed into law.
President Duterte has 365days remaining in the office and the oppositions are trying hard to destabilize the administration.
The new #OustDuterteNow campaign follows the president’s statement he would run for Vice President in the coming May 2022 election.
Tags: Duterte News Update, OustDuterteNow, Philippine election 2022, Philippine Politics

PACQUIAO to cooperate PRRD vs corruption, ask Duterte to calm down1 min read