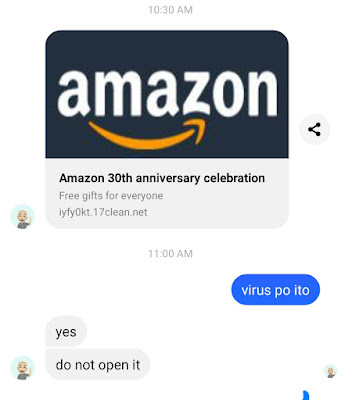 Just recently, another spammy message is being circulated via Whatsapp or Messenger and many Facebook users are complaining about their account being hacked. There are also complaint regarding unauthorized withdrawal from their bank account. How can it be when only the real user know their password?

Well, just like you, I also received this kind of message but I was so suspicious of the message. I did not click or open the link I received, instead, I went to directly to Google to check if there are other cases like this.

I got tons of results but some are dated back in March this year. Here is the latest one that I got. 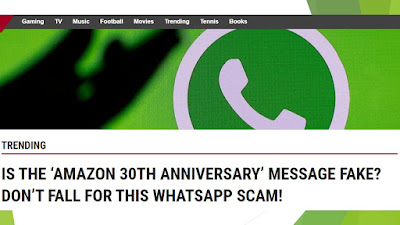 One article that is published 11 hours ago upon writing this article says, “IS THE ‘AMAZON 30TH ANNIVERSARY’ MESSAGE FAKE? DON’T FALL FOR THIS WHATSAPP SCAM!”

Recently, WhatsApp users have found themselves victims of online scams after a message claiming to be giving away free prizes for Amazon’s “30th Anniversary” was sent out.

It is not surprising that many people will get trapped into this malicious message as it promises FREE GIFT from Amazon.

Although it is sometimes difficult to know when something is real or a scam, you can generally tell by the spelling of the URL or email address and the content of the message.

The very first thing I looked into after receiving this message is the URL and since it is different from the real Amazon URL, I just ignored it.

Here is how you can tell whether the said message is REAL or FAKE:

According to the information I gathered,  Jeff Bezos founded Amazon in July 1994. He chose Seattle because of technical talent as Microsoft is located there. In May 1997, Amazon went public. It began selling music and videos in 1998, at which time it began operations internationally by acquiring online sellers of books in United Kingdom and Germany.

So if you have ever received or will receive this message even if it’s from your friend, don’t ever click this link as it will trigger software to hack your device or computer to get valuable any information stored in your device most especially the data you use to login to your email, bank, or social media account.